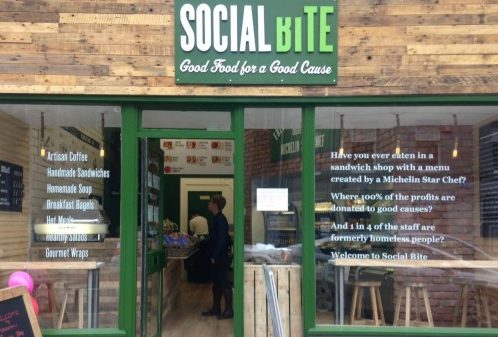 Rough sleeping is never fun to do, but would you do it for a charity fundraiser if that charity was raising money to end homelessness for good?
In December 2017 Social Bites invited 9,000 people to sleep out on a freezing December night to do exactly that! The Social Bites charitable rough sleeping event of the year!

Hats off to our friends who slept out that cold December night, raising  £3.6 million for the charity.  We are very impressed with the amount raised by volunteer rough sleepers aiming to end homelessness for good. Did you hear about the amazing charity sleep out in Edinburgh in December?  We were delighted to donate to this great charity who are doing a remarkable job of raising awareness and effecting real change in our community, Social Bites, started as a sandwich shop that employed homeless people to enable them to find a way out of homelessness, giving them a way to earn a living and find a future of their own. The charity has developed much since its early days. They have even garnered support from famous people like George Clooney, who used his recent trip to Scotland to visit the Rose Street shop, meet and greet fans and promote the charity.

“Alongside this event, Social Bite have commissioned a comprehensive study from Heriot Watt University, to be released in September, entitled ‘Eradicating Core Homelessness in Scotland’. Almost every single ground level homelessness charity in Scotland as well as the Scottish Government are contributing to the study in a series of focus groups. This study will shape a plan to eradicate homelessness in Scotland. We have set an ambitious time frame of only 5 years to solve this pressing Social Issue. With such human suffering on the streets of our small nation, it is important that we are impatient.”

“The sleep out raised a fantastic amount of money for this charity’s continued work to end homelessness and we’re glad to have helped.” Mark Emlick, CEO Consensus Capital Group.

Congratulations to all who slept out in the cold.

Read more about it here: https://www.sleepinthepark.co.uk/social-bite